With an Amazon Simple Queue Service policy, you can grant another AWS account user permission to use your queues....

Without the IAM, the SQS automatically gave the creator of a queue access to all Amazon SQS actions with the queue. It wasn't a good idea because the creator may be in a role that specifies he should not be allowed to use certain SQS actions.

With the IAM, the creator is no longer granted automatic permission unless he is using the AWS security credentials. Any user who has permission to create a queue must have permission to use other SQS actions in order to do anything with the queues they create. 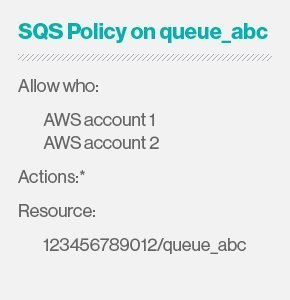 With the IAM, Diagram 2 shows that user John and user Carol have been granted permission to use any actions in the queue_abc. The users must be created in your own AWS Account so they can have access to the queue. 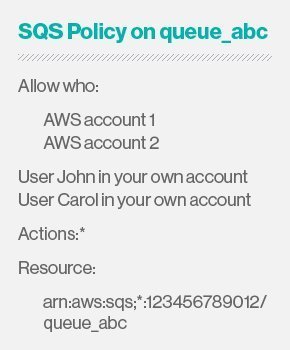 The list of Amazon SQS actions included in "*" has expanded to allow user John and user Carol to create, delete and list queues. The sqs:* in the resource, using the Amazon Resource Name (ARN) format, indicates all regions you've registered for in your queue.

Listed below are three examples of setting up simple IAM policies and one example of using the condition element in a policy.

Example 1: Allow a user to create and use his or her own queue

This policy allows user John to access all SQS actions on john_queue. The SQS doesn't automatically grant the creator of a queue permission to subsequently use the queue. With IAM, you can grant user John permission to use all the SQS actions.

Word of caution: A Resource error message will be shown if you specify multiple regions (sqs:*) in the policy when in reality you've registered for a region, say US East (N. Virginia), when you've signed up for an AWS account. To fix the problem, replace the wildcard “*” with us-east-1, like this:

This policy allows a group of developers to use the SQS SendMessage and ReceiveMessage actions on the AWS Account user's queue named CloudTestQueue.

Word of caution: If the group of developers is denied access, they can't send or receive SQS messages. To fix the problem, create the group in your own AWS account.

Example 3: Allow a partner to send messages to a particular queue

Word of caution: You must use the explicit "deny" in the second statement in order to override the "allow" in the first statement.

Let's take a look at three conditions user Bob must meet and how policy conditions and keys are used to allow him access to your SQS queue.

The DateGreaterThan condition indicates the point in time at which the current time key begins taking effect.

The DateLessThan condition indicates the point in time at which the current time key stops taking effect.

The ipAddress condition indicates the IP address range as specified in the SourceIP key.

Here is a sample policy that includes the conditions in the Statement element.

Word of caution: User Bob will be denied access if he tries to access the queue_xyz before the point of time when the SOURCEIP key starts taking effect set at the DateGreaterThan condition. To fix the problem, change the current time key set for 2014-05-16 to an earlier date, so user Bob can access the queue, like this:

The following is a list of SQS actions you could use on a queue in an IAM policy.

The last three actions were added after the IAM was introduced.

Before you write the policy, make sure you have created users or groups in your own account. Always test the policy to make sure it works before you put it into production.

About the author:
Judith M. Myerson is the former ADP security officer/manager at a naval facility, where she led enterprise projects for its materiel management system. Currently a consultant and subject matter expert, she is the author of several books and articles on cloud use, compliance regulations, mobile security, software engineering, systems engineering and risk management. She received her master of science degree in engineering from the University of Pennsylvania and is certified in risk and information system control (CRISC).